January 21. The Jacksons were throwing some ideas around. “Would Jesus have been an influencer, a celebrity? Would he have had a million followers on Twitter or facebook, or posting videos of himself on Tick-Tock.” “Would his family have thought he was crazy?” “He did have many thousands of followers looking for bread and listening to his message but who were they?  When push came to shove, all, except a few, abandoned him. But then the few grew and grew to what the Christian church is today?” “ Is his mission now complete or what do the actions of some of his Catholic and Christian followers show?” “I want to know, if he came to earth in 2023, where and who would he be?”   Reflect, share, act, pray

Scripture: The crowd came together again, so that they could not even eat.  When his friends heard it, they went to seize him for they said, “He is beside himself.”  Mark 3:20-21.

Pope Francis:   Jesus lived in full harmony with creation and others were amazed. His appearance was not that of an ascetic set apart from the world, nor of an enemy to the pleasant things in life. He was for removed from philosophies which despised the body, matter and the things of the world. He worked with his hands in daily contact with the matter created by God. By enduring the toil of work in union with Christ crucified for us man collaborates with the Son of God for the redemption of humanity. LS98

GOD THE CREATOR IS THE AUTHOR OF BEAUTY 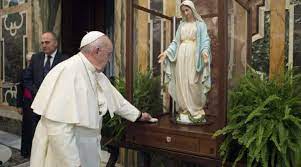